Known as the “Canadian Rupert Brooke,” Bernard Freeman Trotter was a twenty-five-year-old graduate student at the University of Toronto when he volunteered for the Canadian Overseas Expeditionary Force in February of 1916.  Serving as a Second Lieutenant with the 11th Leicestershire Regiment, he trained as a Transport Officer on the Western Front.  He was happy with the assignment, assuring his parents back home, “I find shell fire far less trying on the nerves when on horseback in charge of a convoy than when crouching in a trench.”

His letters home also reflected on the ways in which war changes a man: “One is inclined, I am afraid, to lose perspective very badly, and give no thought to what happens to anyone save your own little party,” he thoughtfully explained. “You watch shells bursting over other people’s areas with the most perfect equanimity. As for the poor Bosch, who gets regularly at least ten to one, he is entirely beyond the pale of sympathy except at odd and fleeting moments” (McMasterUniversity).

Although perhaps he lacked sympathy for the “poor Bosch,” Trotter’s war-time poetry reveals his optimism and faith, as well as his love of nature and high romance. In August of 1916 as he prepared to leave for France, Trotter composed a poem that tells of the sweet goodbye a soldier happily receives before leaving for war. 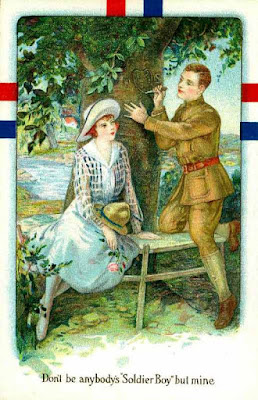 She kissed me when she said good-bye—
A child's kiss, neither bold nor shy.
We had met but a few short summer hours;
Talked of the sun, the wind, the flowers,
Sports and people; had rambled through
A casual catchy song or two,
And walked with arms linked to the car
By the light of a single misty star.
(It was war-time, you see, and the streets were dark
Lest the ravishing Hun should find a mark.)
And so we turned to say good-bye;
But somehow or other, I don't know why,
—Perhaps `t was the feel of the khaki coat
(She'd a brother in Flanders then) that smote
Her heart with a sudden tenderness
Which issued in that swift caress—
Somehow, to her, at any rate
A mere hand-clasp seemed inadequate;
And so she lifted her dewey face
And kissed me—but without a trace
Of passion,—and we said good-bye…
A child's kiss,…neither bold nor shy.
My friend, I like you—it seemed to say—
Here's to our meeting again some day!
Some happier day…
Goodbye. 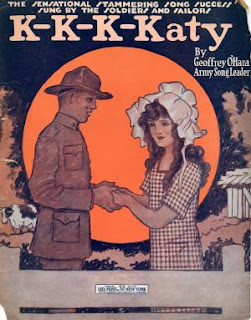 The poem is saturated in hope and innocence.  The sun shines, flowers bloom, and the young couple “ramble through a casual catchy song or two,” perhaps joining together in “K-K-K Katy” or “She Wore it for a Lover Who Was Far, Far Away.” Her face is dewey, his coat is khaki, and as they linger for a last evening’s stroll, their arms linked under the light of a “single misty star,” the young woman is overwhelmed with “a sudden tenderness” that gives way to a swift, impulsive caress.  She quickly bestows upon the young soldier a kiss, “without a trace of passion.”  That impetuous kiss confirms a sweet friendship and promises a bright future meeting when the world has returned to peace and sanity.

Although Bernard Trotter wrote “The Kiss” while stationed in England and preparing for war, the poem makes only the briefest nod to the conflict.  Within the boundaries of this verse, even the Hun seems to join in conspiring to support romance, for thanks to the threat of German attack, the streets are lit only by stars.  Poetry was able to provide both an emotional and imaginative escape from the war for both soldiers and civilians.

Bernard Trotter had been at the front less than six months when he was killed May 7th, 1917.  His commanding officer wrote to Bernard’s father that the young lieutenant “was out with the Transport last night and had just completed his journey and was returning to the stables when a High Explosive Shell burst quite close to him. It must have killed him instantaneously as he dropped off his horse and was past all help when one of his corporals went over to him about half a minute afterwards.  The accident happened about 12 midnight.  They brought him back to the Town where the Headquarters and Transport Stables are and came and reported it to me. On their arrival, I at once got up and got our Medical Officer up to see him, but it was as I feared from the first.  He was past all human aid.  We buried him here in the Military Cemetery alongside two of his brother officers who have been killed quite recently here….We are putting up a simple oak cross and a wooden curb on his grave and shall get it planted with violets and other flowers, and in due course of time you will receive a photo of it….I should like to remark how very much we all regret his loss and all the officers including myself do grieve with you in his sudden death and offer you all our deepest sympathies….He was one of the coolest men I have ever seen under shell fire and I am sure you will be proud of this….I am afraid this is a very incomplete sort of letter to write but we get very hard hearted and rough with these constant casualties (I have lost eight officers this month alone), so I must ask you to excuse it, I and all the officers do feel your son’s loss very much and we offer you and his mother our deepest sympathies.”

His father chose as the inscription for his son’s headstone, “How, dying, smotest thou the one full chord ere thy lute broke.”