Edith Nesbit, the children’s author best known for her novel The Railway Children, wrote stories that combine realism and hardship with fantasy and magic.  Few know that she also wrote poems that communicate the emotional experiences of the First World War.  One of those poems, “In Hospital,” opens in springtime under the shadow of a hawthorn hedge.

In Celtic folklore, the hawthorn is a magical tree that is sacred to the faeries.  In May, the hawthorn’s thorny branches are covered in white blooms, and the tree is often associated with courtship and romance. And yet the flowers smell like decaying flesh (the chemical component – trimethylamine – is the same), and it is considered unlucky to bring hawthorn branches inside the house, as evidenced in the rhyme

Hawthorn bloom and elder-flowers
Will fill a house with evil powers.

Beautiful flowers, sharp thorns, and the smell of death:  the hawthorn symbolizes the union of opposites. 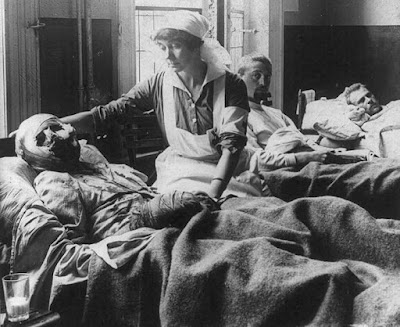 Under the shadow of a hawthorn brake,
Where bluebells draw the sky down to the wood,
Where, 'mid brown leaves, the primroses awake
And hidden violets smell of solitude;
Beneath green leaves bright-fluttered by the wing
Of fleeting, beautiful, immortal Spring,
I should have said, 'I love you,' and your eyes
Have said, 'I, too . . . ' The gods saw otherwise.

For this is winter, and the London streets
Are full of soldiers from that far, fierce fray
Where life knows death, and where poor glory meets
Full-face with shame, and weeps and turns away.
And in the broken, trampled foreign wood
Is horror, and the terrible scent of blood,
And love shines tremulous, like a drowning star,
Under the shadow of the wings of war.

The poem’s two stanzas contrast the seasons of spring and winter to express how the war has utterly changed not only the natural world, but the lives of both men and women caught up in the bloody conflict.

In the opening lines, the lovers meet under the shadow of a dense thicket, much like Sleeping Beauty’s hedge, while bluebells, primroses, and violets push up through the dead, brown leaves of the previous fall. The complexities of life and its irreconcilable opposites are also reflected in the description of Spring itself:  both fleeting and immortal.  Most importantly, the entire season of renewal is now overshadowed by regret – promises never made, emotions never expressed – what should have been.

In the second stanza, London’s winter streets are thronged with soldiers headed to war, men home on leave, and the injured who bear the visible wounds of battle – those missing limbs and the men with disfiguring facial injuries.  The war is a “far, fierce fray” – as different and distant from the blossoming countryside woods as can be imagined.  There are woods in the war zone, but these, too, have been forever altered – “broken” and “trampled.” The forests of battle are not carpeted with fragrant and delicate flowers, but rather with mangled corpses:  scenes of horror and the smell of blood.


And where have the wounded survivors been taken?  The poem is titled “In Hospital” and depicts the reunion of the springtime lovers in the sterile atmosphere of a medical ward.  It is here that “poor glory meets/ Full-face with shame, and weeps and turns away.”  Perhaps the wounded soldier is one of those known as “the men with the broken faces” – this would account for the poem’s references to shame, weeping, and the averted gaze, as well as explaining why only the man’s eyes can speak of his regret.

“In Hospital” is where “love shines tremulous, like a drowning star.”  The metaphor of the last lines holds out only the faintest of hope for the future as we watch the light of love unsteadily sinking beneath the weight of a shadow, while war continues to soar on the wings of darkness.