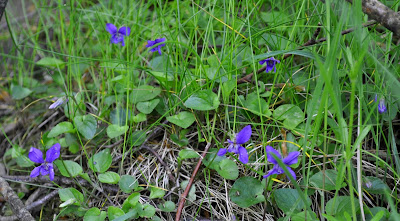 Later that month, Roland wrote to Vera and described a discovery he'd made while walking in Ploegsteert Wood (known to the Tommies as "Plug Street Wood").  Roland had found "the body of a dead British soldier hidden in the undergrowth a few yards from the path.  He must have been shot there during the wood-fighting in the early part of the War.   The body had sunk down into the marshy ground so that only the tops of the boots stuck up above the soil. His cap & equipment beside him were half-buried and rotting away."  Leighton ordered that the body be covered with dirt, "to make one grave more among the many in the wood" (Chronicle of Youth, 25 April 1915).

The next day, Roland started a poem, and while on leave that August (during which time he and Vera became engaged), he showed Vera the finished villanelle that he had titled and dated: "Violets," April 25, 1915.  Her journal records, "I remembered how on that day he had written me a letter – he was then in Ploegsteert Wood—enclosing some violets from the top of his dug-out which he said he had just picked for me."

Violets from Plug Street Wood,
Sweet, I send you oversea.
(It is strange they should be blue,
Blue, when his soaked blood was red,
For they grew around his head:
It is strange they should be blue.)
Violets from Plug Street Wood
Think what they have meant to me--
Life and Hope and Love & You
(And you did not see them grow
Where his mangled body lay
Hiding horror from the day;
Sweetest it was better so.)
Violets from oversea,
To your dear, far, forgetting land
These I send in memory,
Knowing You will understand.

The poignancy of the poem lies in the tension between two voices: a man writing to his sweetheart in a "dear, far, forgetting land," and a soldier talking to himself, trying to puzzle out how the horrors of war can coexist with simple flowers that recall "Life and Hope and Love and You" (this is the voice that speaks in the parenthetical comments).

The soaked blood and mangled body of the dead man are literally entwined with the violets that are gathered for the "Sweetest" and sent to her in memory.  But in memory of what?  Do the violets recall the golden age of innocence and romance before the war?  Or are they sent in memory of the dead man whose body has lain forgotten for months?  There is a bittersweet irony in the poem's last line as it vows she "will understand." He knows she cannot fully grasp what he faces, because his darling "did not see" where the violets grew, hiding the horror of the neglected corpse. And yet the soldier is grateful for her ignorance:  "Sweetest, it was better so." 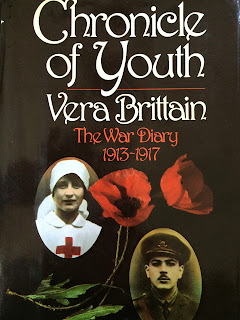 By August of 1915, Roland was having difficulties in finding beauty anywhere on the Western Front.  He wrote to Vera, "I used to talk of the Beauty of War; but it is only War in the abstract that is beautiful.  Modern warfare is merely a trade." In September, he was even more direct about his altered opinion of the war:  "Let him who thinks that War is a glorious golden thing…let him look at a little pile of sodden grey rags that cover half a skull and a shin bone and what might have been Its ribs, or at this skeleton lying on its side, resting half-crouching as it fell, supported on one arm, perfect but that it is headless, and with the tattered clothing still draped around it; and let him realise how grand & glorious a thing it is to have distilled all Youth and Joy and Life into a foetid heap of hideous putrescence. Who is there who has known and seen who can say that Victory is worth the death of even one of these?"

Roland and Vera were to have been married during his Christmas leave that began December 24th, but while waiting expectantly for his arrival, she  received a telephone call informing her that Roland had died of wounds on December 23rd.   He was buried in France in the Louvencourt cemetery.  The inscription on his headstone reads, "Goodnight though life and all take flight – Never goodbye."  The lines are a reference to a W.E. Henley poem that Roland had shared with Vera in a letter in May of 1915, describing how as he crossed a field in the starlight, a little poem of W.E. Henley's came into his head:
Goodnight, sweet friend, goodnight!
Till life & all take flight
Never goodbye.
He again alluded to the poem as he was returning to the Western Front after his August leave, sending Vera a telegram that read "Till we may live our roseate poem through," and a brief letter that read, "Nearly at Folkestone now.  I am trying not to think of it, but the thought will come.  Oh damn, I know it—
Goodnight, sweet friend, goodnight!
Till life & all take flight
Never goodbye."

Vera Brittain visited Roland Leighton's grave twice, once in 1921, and again in 1933.  I'd like to think that she left violets.