Kneeling in the Mud 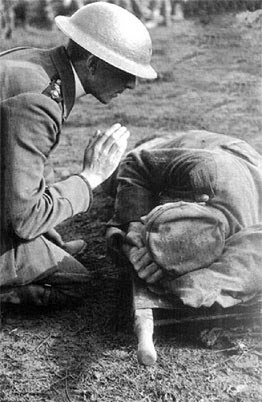 Over 5,000 British priests and pastors served as army chaplains or padres during the First World War.  Their job was to provide spiritual guidance for the soldiers and to boost the morale of the men at the front.  The grim realities of the job included scenes they hardly could have imagined.

Often stationed just behind the lines at first aid posts and casualty clearing stations, padres ministered to wounded and dying men.  In a war in which bodies were often torn apart or abandoned in No Man's Land, padres assisted in retrieving and identifying soldiers' remains and giving them burial.  They frequently had to deliver news of men's death to their comrades-in-arms, and theirs was the gut-wrenching duty of providing solace to men who had deserted and were to be shot by their fellow soldiers at dawn.  The BBC webpage "Why did chaplains end up on the front line in WW1?" tells more of their stories.

Geoffrey Studdert Kennedy was not only a padre, but a poet.  His poem "Lighten our Darkness," shares the struggles of a man wrestling with his faith and his God in the midst of war. 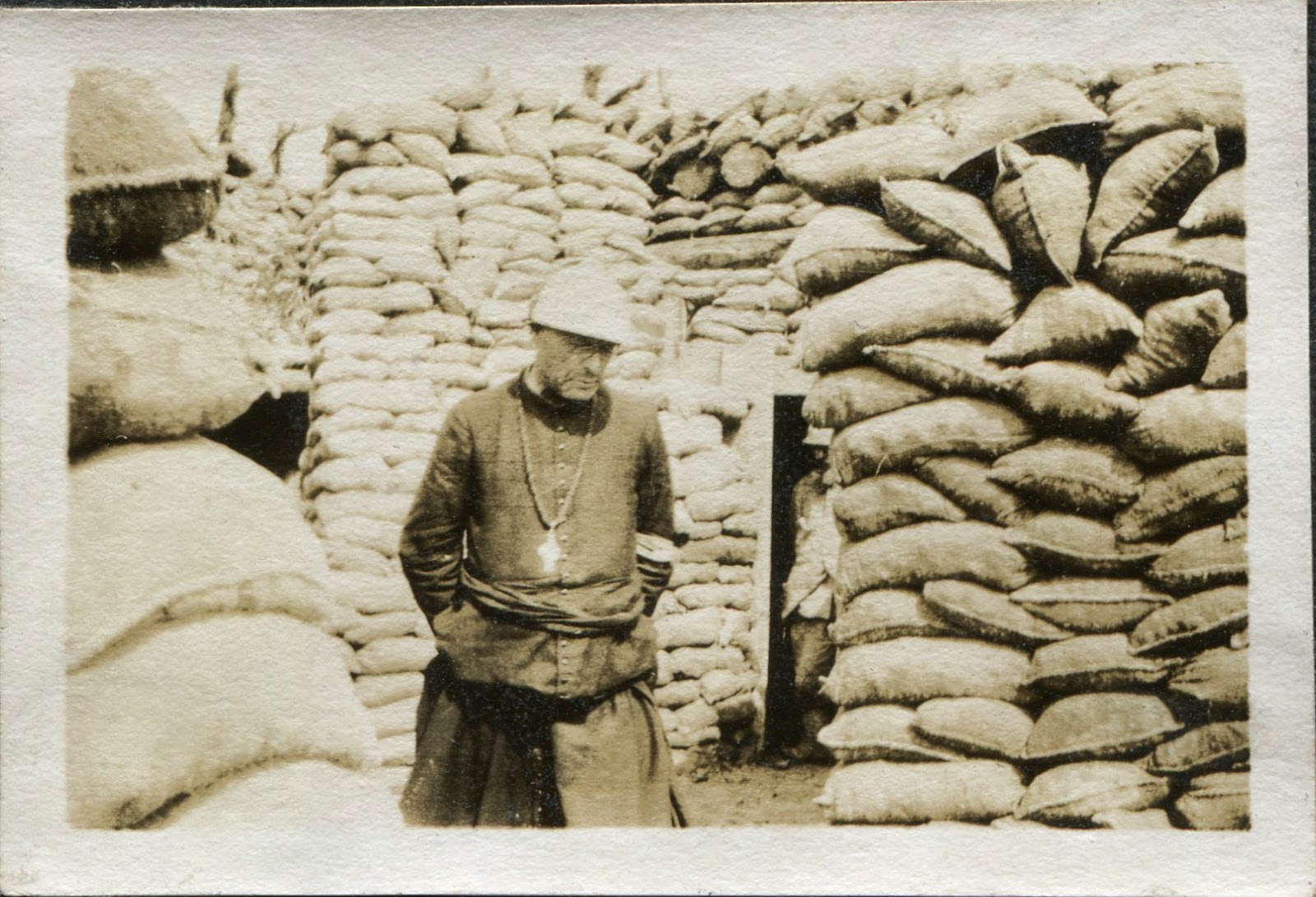 Lighten our darkness, Lord, in bygone years,
Oft have I prayed and thought on childish fears,
Glad in my heart that, when the day was dead,
God's four white angels watched about my bed.

Lighten our darkness! Kneeling in the mud,
My hands still wet and warm with human blood,
Oft have I prayed it! Perils of this night!
Sorrow of soldiers! Mercy, give us light.

Lighten our darkness! Black upon the mind
Questions and doubts, so many paths that wind,
Worlds of blind sorrow crying out for sight.
Peace, where is Peace? Lord Jesus, give us light.

Lighten our darkness! Stumbling to the end,
Millions of mortals feeling for a friend,
Shall not the judge of all the earth do right?
Flame through the darkness, Lord, and give us Light.
--Geoffrey Studdert Kennedy

The poem begins with a memory:  in "bygone years," when he was safe at home and in his bed, a man remembers praying for God's light in response to his "childish fears."  The second stanza repeats the prayer, but this time an exclamation point marks the desperate urgency and need in his very different current circumstances:  "Lighten our darkness!"  Three more exclamation points in the stanza communicate the mental anguish that prompts his call to God.

He kneels in prayer, not at his own comfortable bedside, but rather in mud on a battlefield, his hands "still wet and warm with human blood."  In the muck and gore of the Western Front, in the darkness and dangers of the night, he calls out to God, simply naming him "Mercy."

The third stanza again repeats the prayer for light.  Darker than the terrors of the battlefield, however, are the bleak, internal struggles of the mind.  The man's "Questions and doubts" are likened to the maze-like paths of the trench system that are estimated to have stretched for over 25,000 miles if laid end-to-end.  Like the zig-zagging trenches that are shored up with dead bodies and are full of misery and fear, the man's doubts are life-threatening.  From the blackness of his thoughts, "Worlds of blind sorrow" cry out for sight.  Each dead man encapsulates a world of his own -- a home, a family, friends, dreams -- and the padre carries with him worlds and worlds of grief that have blinded him with tears and with the inability to see past the losses. 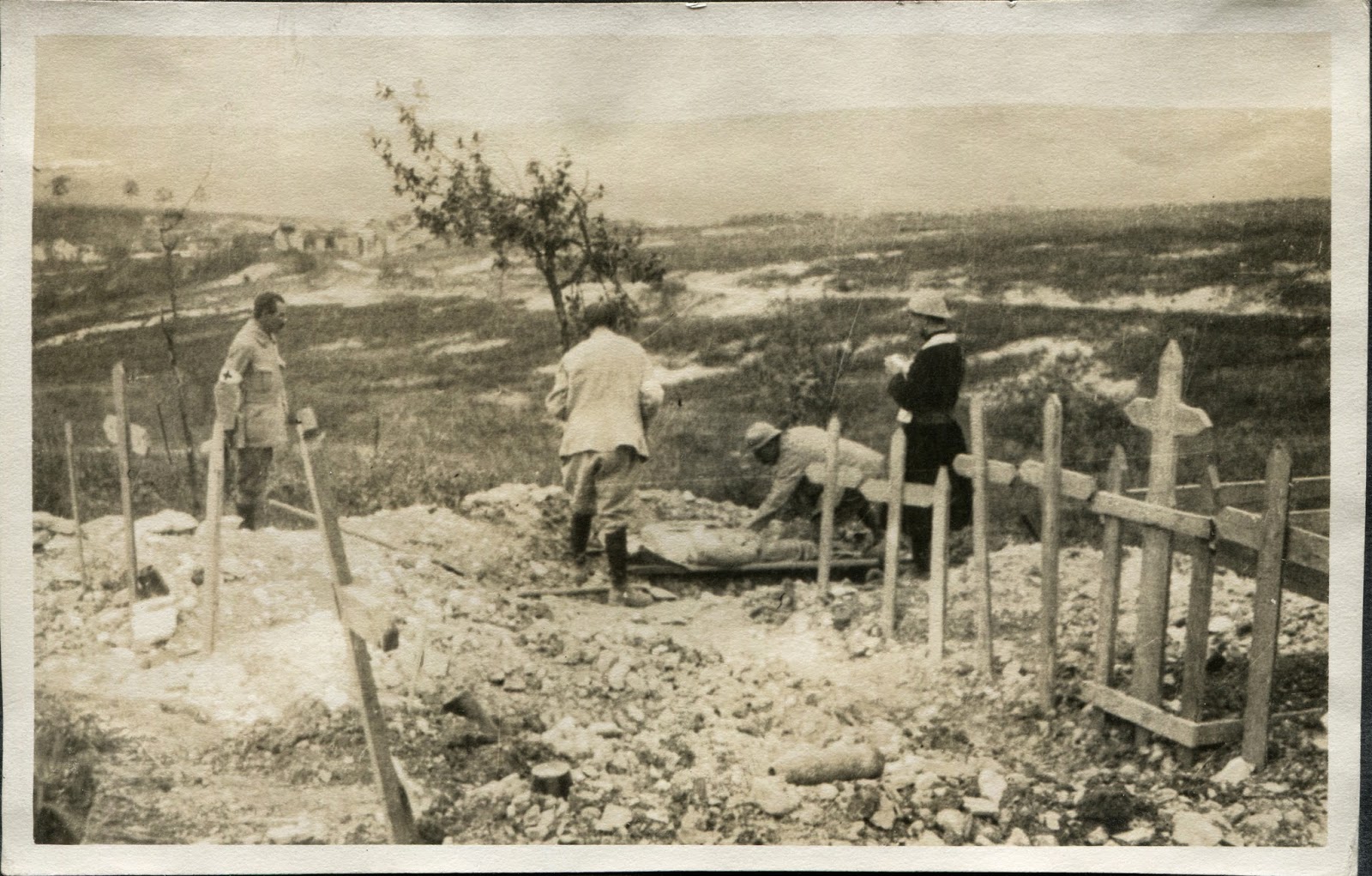 He begs the question "Peace, where is Peace?" No answer is given, and so he again prays for light, this time addressing Jesus directly.  It is as if the speaker knows that an end to the fighting is nowhere in sight, but if light can be given, he can endure the war.  Light signifies both hope and vision:  he prays for insights that will reveal that the war has purpose or meaning.

The last stanza extends that prayer: it is not just one man who struggles, but "millions of mortals feeling for a friend" in the darkness.  The double sense of the word "feeling" suggests both emotional attachment and a blind man's reaching out to find the way.

In the poem's last line, however, the seeker turns from a plea for meaning to a prayer for Presence.  The man asks God to "Flame through the darkness," an image that recalls the pillar of fire that embodied the holy presence of God that led the Moses and the Israelites in their wanderings through the desert.  Like Moses, it is as if the supplicant relinquishes his need for answers and control, saying "If Your Presence does not go with us, do not bring us up from here" (Exodus 33:14).  Even though he may "stumble to the end," it is possible to move forward if God's flame, whether pillar of fire or candle light, is there with him. 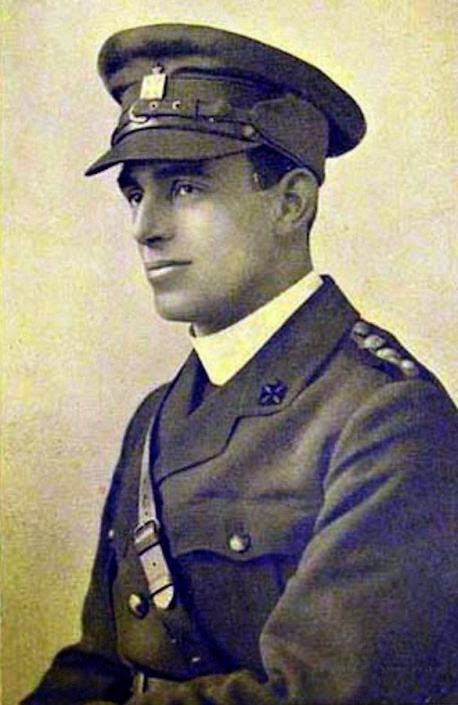 Studdert Kennedy is one of the best-known and loved chaplains of the First World War. Nicknamed "Woodbine Willie" because he shared cigarettes of that name with soldiers, he was known for his humble willingness to simply stand alongside the fighting men and do what he could to lessen their suffering.  Further details of his life and service can be found here and here.
When he died on March 8, 1929, as his body lay in state in Liverpool, over 1,700 mourners paid their respects in a single day.  Studdert Kennedy once wrote, "Nobody worries about Christ as long as he can be shut up in churches.  He is quite safe there.  But there is always trouble if you try to let him out."  Studdert Kennedy loved a dangerous God that he wrestled with on the battlefields of the First World War.
Posted by Connie R. at 12:38 PM